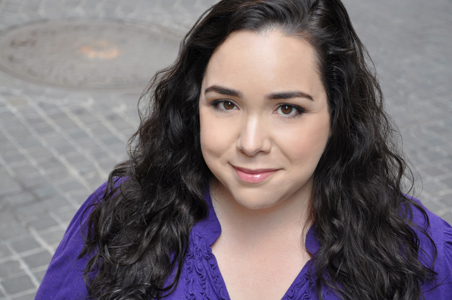 A performer from a young age, she caught the bug when Maria auditioned for a local community production of The Sound of Music at age 11. Maria then began her professional career in New York City and worked in musical theatre, television and film. She was auditioning for Broadway shows, regional theatre, summerstock and all of the TV and film productions that were filming in NYC. You may have caught Maria’s performance on Lifetime’s hit drama ARMY WIVES, which filmed in Charleston, South Carolina. Maria had a recurring role as the very moody army wife, MaryAnn. Maria also had the opportunity to travel to Bogota, Colombia to film an episode of binge-worthy LOCKED UP ABROAD for the National Geographic channel. Don’t worry, Maria was the reenactment actor, she wasn’t in trouble! Maria also had the amazing opportunity to act opposite Bollywood legend and superstar, Sridevi, in the Toronto International Film Festival premiere movie, ENGLISH VINGLISH.

Maria began working in voiceovers in 2010, booking her first spot for a local university in her hometown of Buffalo, NY. Since that first booking, Maria has gone on to record thousands of spots, narrations and projects for clients around the world.

As a commercial voiceover talent, Maria has lent her voice to campaigns for global brands like Comcast/Xfinity, Dannon, American Express, Hoover, Panera and more. Maria’s voice is heard on broadcast & cable television commercials, radio spots, streaming ads on Pandora & Spotify and pre-roll ads on YouTube, Hulu, Pluto TV and more.  (Please reach out anytime for a list of current commercial conflicts to see if Maria is clear to voice in your product category.)

A Narrator For All Genres

As a narrator, Maria has had the pleasure of working on a variety of documentaries. Whether it’s pop culture, nature, true crime or dramatic events, Maria has a great vocal quality and tone to tell a story to interested viewers.

When it comes to industrial work, Maria is a master at making corporate jargon, tech-speak or medical information come across as digestable, understandable and approachable. With experience working in Corporate America for a global bank prior to becoming a full-time actor, Maria can move through business presentations, explainer videos and e-learning courses with ease. She truly sounds like she is just the employee in the cubicle next door to share important information with her colleagues. Maria has narrated critical business training programs including OSHA safety training, securities & finance compliance, sexual harassment mandatory education, and diversity, equity & inclusion trainings. She’s also voiced explainers, how-to videos and tutorials for software, apps and more.

A talented voice actor, Maria loves to bring characters to life in animation and video games. Maria is a master of accents, sounds and placement and can perform like a vocal chameleon –  bringing creatives’ vision to life. Maria plays the lead Prim, in the upcoming Prim Adventure Game, set for release in 2022. Her “north star” voiceover goal is to originate a singing animated villain, in the style of Ursula the Sea Witch from The Little Mermaid.

If you’re looking for a fresh voice for your radio station imaging, Maria Pendolino is a great choice. Her youthful, sassy and energetic delivery is perfect for formats like CHR, Alternative Rock, AC, Hot AC and New Country.

Maria is honored to be the telephone system voice for small businesses, medium-sized enterprises and Fortune 500 companies. She brings a friendly and relatable tone to messages and prompts that are usually very perfunctory. Keep your customers on hold happy by using Maria’s voice on your telephone and IVR systems.

Maria performs as a voice actor from her dedicated, professional recording studio outside of Buffalo, NY. She’s proud to be a member of the National Association of Women Business Owners (NAWBO) – Buffalo/Niagara Chapter, the Buffalo chapter of the American Advertising Federation (AAF) and the Buffalo Broadcasters Association. She also serves as the Vice President and Secretary of the Board of Directors for Alleyway Theatre, a non-profit theatre dedicated to producing new works and amplifying new voices in Buffalo, NY and as a member of the Rising Champions for Justice that supports the work of the Erie County Volunteer Lawyers Project.

Maria lives in Buffalo, NY with her husband Eric and their four rescue cats Two Scoops, Mozzarella “Mozzie” Cheese, Nellie and Panini. As a fun fact, Maria and Eric were on an episode of HGTV’s hit flagship show House Hunters.

Maria Pendolino is a talented, professional female voice actor that works every day, full-time, from a dedicated broadcast-quality recording studio. When you need a female voiceover talent to bring your words to life, Maria Pendolino should be your first call. Maria works across genres including commercials, explainer videos, e-learning, corporate presentations, live announce, telephone systems & IVR, animation and video games, to name a few.

Her confident, friendly, approachable, relatable, conversational and sassy voice is a top choice by producers around the country for all kinds of voiceover content. Whether it’s a national television commercial, a documentary, a training program, an online learning module or a telephone system - Maria’s signature voiceover performance is a great choice to bring professionalism and polish to your project. Reach out for a voiceover audition today!