Singing for Animation, Broadway, and More!

The only thing Maria loves more than typical voiceover is SINGING! You can expect nonstop singing if you’re ever in a car with her. From Broadway to Disney to ‘90s Lilith Fair songwriters, Maria can match her voice to it all. Maria began her acting career in musical theatre, TV, and film before she realized that #BoothLife and voiceover was her true passion.

Besides belting out songs to the back of the house, she has a few Bonnie Tyler and Celine Dion songs ready for those epic karaoke nights. She’s also seen Hamilton live seven times in 4 different cities and two countries (not that anyone’s counting).

Ursula from “The Little Mermaid” is Maria’s ultimate singing role model. Is there anything more fun than voicing a female villain? But if your character doesn’t want to steal souls, don’t worry – Maria is eager to take on any animated character who sings.

From evil, sexy villains to plucky, lovable female lead characters, Maria is an adaptable voice talent who takes direction well. Maria offers character voices from young to old and everything in between. Maria is also a master of accents and can sing accented as well. She is a powerful alto belter who has performed in a variety of both classic and modern musicals. She keeps her instrument fresh with regular voice lessons and also plays the piano. 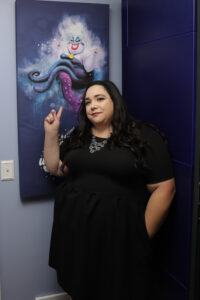 With a degree in Creative Writing and Musical Theater and a variety of professional theater experiences in plays and musicals, Maria is available for any animation, video game, musical theatre or Broadway-style singing projects. Maria is often hired to provide reads that voice match celebrity trends – so if you’re looking for a voice actor who sounds like Ursula the Sea Witch from The Little Mermaid, Kristen Bell from Frozen or a sultry pop sound like Adele, get in touch!

Maria Pendolino is a voiceover artist and trained musical theatre performer that brings text to life as a female singer and performer. If you’re looking for a voiceover singer for a jingle, station branding or character performance - Maria would love to be a part of your project. Maria is a mezzo-soprano with a diverse range and specializes in bringing music productions to life. Maria also collaborates with talented composers if you need to add music and voice to your jingle or branding identity.

Maria loves to sing in character, sing with accents or take on vocal affectations, so if you’d like to hear a sample - simply get in touch. Maria has performed on stages across the country as a singer and actor and as a voiceover artist that sings would love to work on your project.