Need a Female Voice Over Actor for Video Games?

Are you developing a video game and looking for the perfect female video game voice actor? Maria Pendolino is an experienced voiceover artist with experience lending her talents to video game production studios of all sizes.

Video games have become an increasingly popular form of media over the years, and it’s a trend that is showing no sign of slowing down. In fact, as of 2020, there are estimated to be over 3 billion people around the world who play video games.

While this is good news for countless video game fans worldwide, it also has interesting implications for the professional voiceover industry, where requests for female video game voice over have become more common. After all, what would a video game be without voice acting? If you guessed “boring,” “confusing,” or “impossible to play,” you’re likely on the right track.

The Importance of Professional Voiceover Quality in Video Games 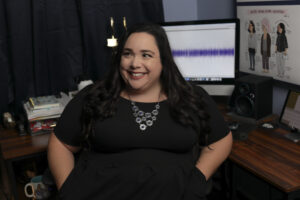 Hiring a female video game voice over talent is not just crucial for big-name developers. Even if you’re an indie game developer working on a brand new project or a student developer who is still learning the ropes, your game can benefit from the polished professionalism of a skilled voiceover artist.

Sometimes, a video game’s voiceover performance will be so memorable that fans reference it for years to come. Just ask fans of popular franchises like Red Dead Redemption, Borderlands, or Uncharted how they feel about the quality of the voice acting in video games—they’ll likely be ready to sing the game’s praises. There’s no denying that the right vocal talents can add a lot to an already great game. Video games and voice acting are both art forms, and when they complement one another, magic happens.

Though voice acting is important to video games across the board, there is no such thing as a “one size fits all” approach to video game voice acting. As a professional voice actor who has worked with various clients, Maria Pendolino can work with you to create the kind of vocal stylings that will best suit your game and provide cohesive results.

No matter your game’s style, Maria’s engaging, evocative voice can provide voiceovers that match any direction. Maria is highly skilled at matching celebrity vocal trends—so if you have a muse in mind, let Maria know. She can draw from her voice acting experience that dates back over a decade.

Maria also loves performing character work with accents! If your characters need any of these accents or dialects, Maria is the video game voice actor you’ve been looking for:

Maria is also a fantastic mimic – so if there is a particular accent or affectation that you are looking to replicate – Maria can listen and perform on demand. 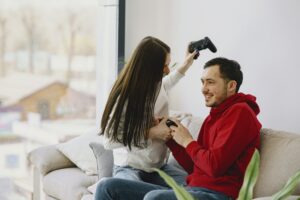 Maria recently completed work on PRIM, a 2D point and click adventure game set for release in 2022, in which she voices the main title character. This highly-anticipated German game was entirely crowdfunded, reaching their monetary goal in less than 24 hours.

While playing Prim, Maria allowed the popular character’s personality to shine through her vocal stylings. She did this by channeling the witty, creative, and adventurous mannerisms of Prim, a character who occupies a special space in the consciousness of fans and series creators alike. A little bit of Daria and Coraline all mixed into one. Maria’s signature video game voice acting performances can bring even your most particular characters to life.

With a background in musical theater, Maria is also a trained singer and would be extra happy to voice any of your video game characters who happen to be musically inclined.

Maria is available for any video game project for all console types, including PC, Xbox, PlayStation, and beyond. She is also happy to work on projects of any budget – from major AAA studio games to independent crowdfunded passion projects. One of the major benefits of outsourcing your voiceover talents to an experienced freelancer is that you do not need to worry about any technical specifics. The finished product that you receive is exactly that—finished. There is no need for any last-minute edits or tune-ups because you are working with broadcast-ready materials.

Maria is proud to operate a state-of-the-art home recording studio. This studio makes it possible to provide clients with broadcast-quality audio files ready to implement into video games. As a full-time professional actor, Maria has been working from home for more than a decade—back when it was still pretty uncommon and sometimes even called “telecommuting”! 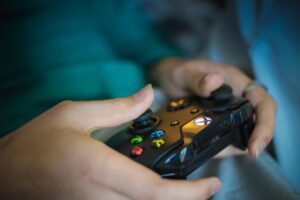 Maria is happy to provide raw or edited audio files to match the needs of your projects. She has a variety of high-end studio equipment at her disposal, including professional-grade microphones and editing programs. Maria can complete all voice-over projects from the comfort of her own home—a positive fact for both your timeline and your budget.

Whether your video game project is funny, spooky, serious, wacky, or bizarre, Maria is up to the challenge. Maria is also happy to work with you to fine-tune your plans for a voiceover actor if you’re still trying to get your character deployment just right. Listen to Maria’s demos or get in touch to request a live audition (free of charge!). Call or email Maria directly today to help make your video game a reality.

Maria Pendolino is a pro female voiceover talent with more than a decade of experience in the recording booth. From her dedicated, broadcast-quality recording studio, Maria is able to record sessions that can work with your timeline to provide a playful yet professional voice to your video game project.

Needing an engaging and evocative female video game voice over for a PC, Xbox or PlayStation video game? Maria is available for any video game project for all console types and beyond. She loves games - big and small - and is happy to work on providing the voices you need to make your video game a voice acting success story!