Maria is frequently called upon to deliver celebrity references voiceover in the style of today’s top pop culture icons. 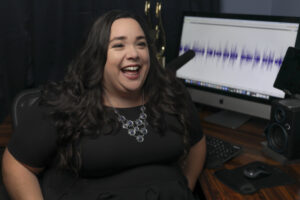 While Maria is not an impressionist and does not market herself as a celebrity impressionist, she can deliver a read in the style of today’s top names – Maria is happy to perform in their voices and deliver celebrity voice match requests for ADR in promos and trailers.

Maria watches commercials – trust us, you don’t want to watch TV with her because sometimes she fast-forwards through the show to get to the commercials. But, because of this – she is very familiar with the different campaigns that celebrities have worked on. So, if you’re thinking of Tina Fey’s American Express or Allstate commercials, John Krasinski’s Esurance campaign, Minnie Driver’s Lexus commercials and more – Maria can easily research and emulate the campaign’s tone and delivery to give you that celebrity-adjacent voiceover performance that will delight your clients and your team.

Maria Pendolino is a nationally-recognized and award-winning voice actor. As a vocal and genre chameleon, Maria is often called upon to infuse the sound and tone of popular celebrities in her reads for commercials and documentaries. Many times, when folks have a celebrity voice in mind, it's not something that is possible with the constraints of their schedule and budget. Maria is able to bring almost 2 decades of voice work, acting, singing and performing experience to scripts that require that extra bit of flair. While Maria is not a celebrity impressionist, she is able to adapt the style, tone, cadence and inflections of popular female celebrities working today, including: Scarlett Johansson, Tina Fey, Amy Poehler, Kristen Wiig, Kristen Bell, Melissa McCarthy, Rashida Jones, Kate McKinnon, Anna Kendrick, Elizabeth Banks and more. Maria is especially adept at scripts with humor or those that require a bit of real life improv.

Maria is in the booth every day recording female commercial voice-overs, character animated cartoons and video game voiceovers, female voice-overs in explainer videos and all kinds of narration for corporate videos, e-learning and tutorials. You can also use Maria's voice for medical narration, live announcer & voice of god (VOG) for award shows, documentaries and television shows, telephone, IVR systems & message on-hold systems, radio imaging and telephone on-hold systems. Maria is represented by agencies and brands across the world who know that she can deliver their words to drive business, revenue, sales and growth.